Our colleague, German journalist Paul Arne Wagner has been violently seized by the police while he was documenting the protest against corruption in Bucharest.

We do not know how many protesters have been seized nor why the Romanian gendarmerie does not consider citizens’ and journalists’ rights to participate and document a democratic manifestation.

[Update] Two hours later, Paul has been released – we are gathering all of the available legal documents to find out the reasons for this abuse.

We would also like to thank our fellow colleagues for not letting this abuse pass by unnoticed. 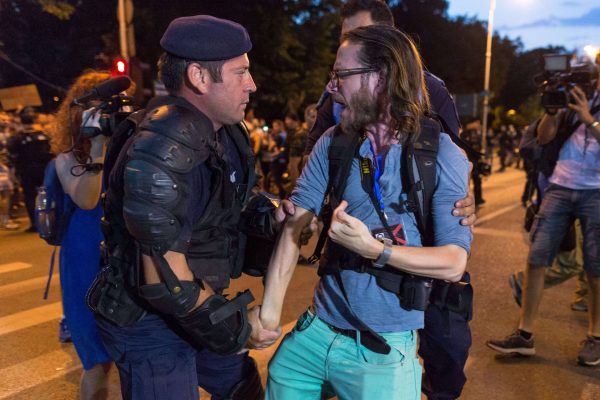 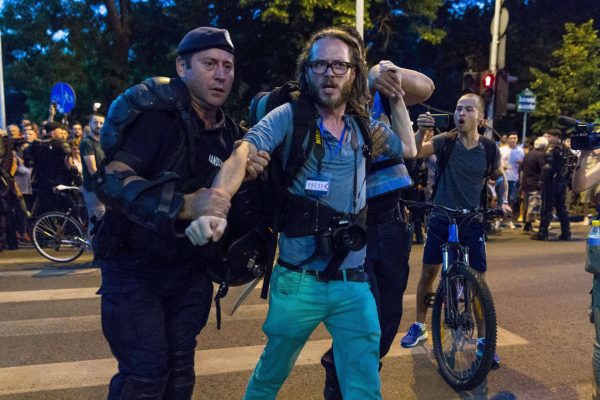 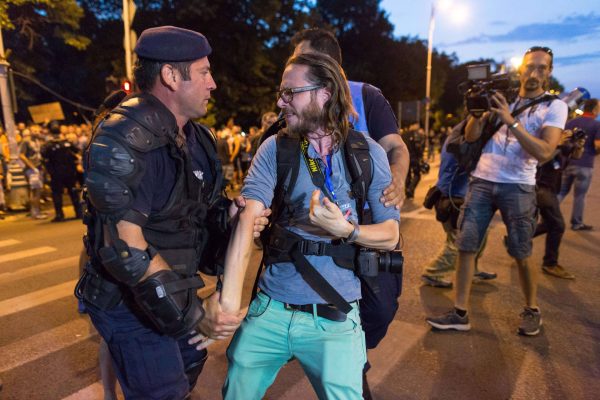 In his own words,

“…tonight (20th of June 2018) I was documenting the protest from Piața Victoriei, sitting in the middle of a crosswalk when suddenly, I was being dragged away (by the police force). The street light was green. I keep on re-watching the footage, trying to understand what actually happened there.

For me, the most pressing question is – Why did they (the police force) bring special forces (aka ‘turtles’) which turned against peaceful protesters – the protests have been peaceful for more than 500 days. Why did the Romanian geandarmerie instigate violence, diversion and chaos? When the ruling party organized a counter-manifestation, they were completely missing but we’ve documented this as well.

I am safe now – only some bruises on my knee. Thank you for your messages but my thoughts go towards all of the people that weren’t so lucky – people that were violently bruised by the state’s security baton, people that were lifted out of a peaceful manifestation and abused, as seen on my colleagues videos – videos which will be published soon. For these people (the protesters), there was nobody to call the German embassy, or the German foreign affairs office, or any other legal entities to warn them about what transpired.

On a bright note, Dragnea’s armed arm ends there. Maybe you’re taken to a police station, maybe you have to spend some time there, maybe you even get abusively fined, but you will be back to protest against corruption. I even heard police officers, out on a smoke, discussing how will they do their job if the penal code amendments go to pass. I am sorry that in 30 years, Romanians have to fight again for freedom, but we are with you. Don’t let these abuses intimidate you.

Together with my colleagues, for over an year, we are documenting protests and we consider that, at least a segment of the Romanian gendarmerie, is out of control as an institution – an oppressive force that endorses systemic abuses.

There was chaos at the police station. With the middle of the night soon to pass, the armed forces were coming in and out of the rooms, running around, bringing in more and more protesters, from young to old – people they did not know what to do with. In this time, even the gendarme that took me had anger in his eyes and an extremely violent, brute like attitude. He only stayed with me even though I stated that he is there only for intimidation purposes and that I would prefer if he kept his distance. I’ve been accused of contradicting matters – there was no correlation between their stories – only lies such as my aggression of the police force, and so on. Then suddenly, something strange happened – they tried to make me to sign a warning ‘so I won’t get fined’ in order to leave, but I wasn’t even allowed to read it – so I did not sign the paper.

In the end all I want to say is that your (the police) fight for me, starting off today, became a personal one. I am in Romania for over two years, but this is the first time when I felt the states abuses on my own skin.

I will see you tomorrow at the protest! Now, that I’ve learned Romanian, I have no intention of leaving anytime too soon.“

You can find my story in Romanian here